There are six (6) basic kitchen layouts which evolved from the traditional work triangle to more practical work-zone configurations. 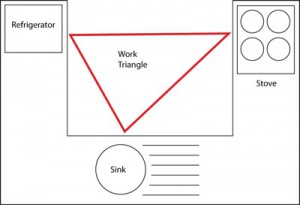 The traditional work triangle concept is used to determine efficient kitchen layout based on the primary tasks carried out in the kitchen which center around the cook top, the sink and the refrigerator. These are the three (3) point on the triangle. The idea is when these points are relatively close to one another, then the kitchen will be easier and more efficient to use by reducing the distances traveled while working between these points.

One Wall Kitchen was originally called the “Pullman kitchen,” the one-wall kitchen layout is generally found in kitchens with narrow spaces. In this configuration, all the cabinets and the appliances are mounted on only one side of the wall of the kitchen.

The term “Engineered wood” is used to describe a range of derivative wood products which are manufactured by binding together wood particles, fibers or veneers with adhesives to form a composite material.

Plywood is a type of engineered wood made from thin sheets of wood, called plies or wood veneers. The layers are glued together, each with its grain at right angles for greater strength.

MDF is an engineered wood product composed of fine wood fibers combined with a synthetic resin or other bonding system & joined together under heat & pressure to form panels. It’s less dense as compared to HDF.

Particle board or Chip board is a board made from graded wood chips / saw dust / wood particles bonded together with an adhesive under great pressure & heat. The constituents are similar to MDF but with a low density.
© 2018 xynkrafts limited. All Rights Reserved
SKT Interior Lite